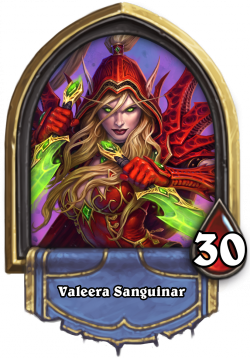 The rogue class is represented by Valeera Sanguinar. Rogues prefer to dispatch of their enemies by using combinations of attacks before retreating back to the shadows. As such, their class cards are related to Stealth and Combo, which allow them to pick their targets carefully and do great amounts of damage in a single turn.

Rogues have easy access to weapons in the form of their Hero Power, Dagger Mastery, which creates a simple Wicked Knife. Wicked Knife can be used to cheaply remove weaker minions, and can also be buffed up with Deadly Poison to help against stronger foes. Unlike other damage-based hero powers, Wicked Knife can be saved for the following turns.

Many of the class cards utilize the combo mechanic, granting them a special effect if another card is played beforehand. This can be for more damage (Eviscerate and Perdition's Blade) or an addition effect (SI:7 Agent and Kidnapper). Other class cards, such as Conceal, will grant Stealth to friendly minions. This can be incredibly useful if you need to protect certain key minions from being targeted, such as Edwin VanCleef or Violet Teacher. The Rogue also has a cards that will put enemy minions back into the opponent's hand for a cheap cost, such as Sap and Vanish.

Backstab, Preparation and The Coin are very useful combo activators, as they both cost 0 Mana to play.

Since rogue uses weapon frequently, she is more likely to lower her life quickly. Use healing minions to offset this.

Rogues now commonly play only one type of deck: oil rogue. Oil rogues use Preparation in conjunction with powerful spells to gain tempo with less mana. It has high burst damage and relatively reliable card draw.

Rogues possess a wide range of skills that allow them to accomplish feats from disarming traps to finding secret doors to smacking a magic item until it works. They are decent in a fight, and if they can strike quickly or unseen — or are flanking an enemy with the help of a thoughtful ally — they can be truly deadly. Of course, they also excel at stealth.

The rogues of Azeroth are the masters of subterfuge, skilled and cunning adversaries of those who dare not look into the shadows to see what lurks there. Roguery is a profession for those who seek the adventures of stalking in silent forests, dimly lit halls, and heavily guarded strongholds. Using trickery in combat and able to vanish at the slightest distraction, the rogue is a welcome addition to any group of adventurers. Ideal spies, deadly to those they can catch unaware, rogues have no problem finding a place in the world. Deadly masters of stealth, rogues are the whispers in shadowy corners and the hooded figures crossing dark fields. Skilled with daggers and the art of silent death, these vagabonds and bandits skulk about Azeroth seeking targets and profit. A member of almost any race can learn the tricks necessary to become a skilled rogue. Still, for the tauren and draenei, such a profession is an alien concept and therefore rare (if not non-existent) among those peoples. Rogues can be found among all races on Azeroth. Whether they are diplomats, spies, thieves, scoundrels, entertainers, or simply adventurers, you can find them plying just about any trade from Mount Hyjal to Ratchet.

For as long as there were dark alleys and needs for dark services, there have been rogues, and thus they are one of the oldest professions in Azeroth. Rogues are a diverse class, and they are typically made up from the dregs of society — cutthroats, pirates, robbers, and low-lifes. The only code rogues live by is the contract, and their word is only as good as the money their services are bought for. The diverse aspects of their trade requires rogues to be well versed in lockpicking, toxicology, rudimentary alchemy, and brawling. In combat rogues rely on the element of surprise and tactics which are regarded by most as vile and cowardly. They are rarely seen entering a fight without weapons laced in poisons and ample supplies of everything from bombs to elixirs in their backpacks. Their attacks concentrate on weak points in the body in an attempt to finish fights brutally and quickly. Rogues play prominent roles in every aspect of society. They will rarely be written into history books because their involvements will be largely unknown to the common person, but they are always there, greatly affecting the flow of events from the shadows.

From the high-contract assassin hired in secret by respected noblemen to the lowly street mugger, rogues are the ones called upon when maintaining the status quo requires a questionable solution — and by fulfilling it, they are branded as outcasts by the very society that calls upon their service.

In Azeroth several rogues are free agents, though most prefer to join a guild for safety and ease of employment. Ravenholdt and the Syndicate are examples. Other recognized rogue organizations include the Shattered Hand, the Deathstalkers, and SI:7. [1]