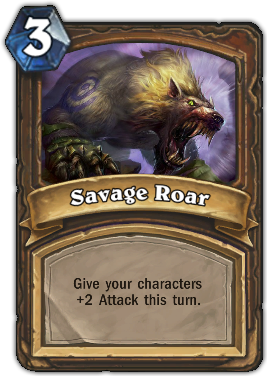 3
Effect
Give your characters +2 Attack this turn.
Card Information
Class:
Druid
Type:
Spell
Subtype:
General
Rarity:
Free
Set:
Basic
Artist:
Grace Liu
Description
What do they roar? Nobody can quite tell, but it sounds like "Elephant Macho Breeze". It's probably not that, though.

Savage Roar is a Druid Spell card that gives +2 Attack for all your minions on the board when it's played and your hero during this turn.

This card can be comparable to Bloodlust, another card that gives attack bonuses to all minions on the field. However, unlike the Shaman class, Druid is not typically a class that has a lot of minions on the field, so this card is not used often in a typical Druid deck. One of its saving graces, however, is that it also gives your hero some bonus attack value as well.