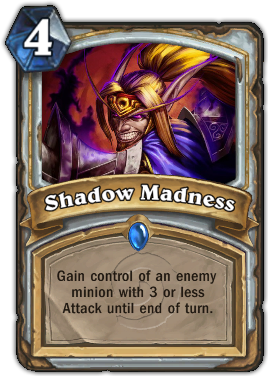 4
Effect
Gain control of an enemy minion with 3 or less Attack until end of turn.
Card Information
Class:
Priest
Type:
Spell
Subtype:
General
Rarity:
Rare
Set:
Classic
Artist:
Mark Gibbons
Description
You can rationalize it all you want, it's still a mean thing to do.

Shadow Madness is a Priest class Spell card. Its effect is to gain control of an enemy minion with 3 or less Attack until end of turn.

An effective way of using this card is to take control of a low cost enemy minion and to trade it with another, killing both for just one card. It can also be used to suicide a high priority minion into other enemy minions. You also gain whatever abilities the minion has for the duration of the spell, such as an attack bonus from Raid Leader or Dire Wolf Alpha (allowing for more efficient trades with your own minions), the ability to draw yourself cards by Northshire Cleric or Acolyte of Pain, or even Deathrattles. If you suicide or trade with a Loot Hoarder, you get to draw a card instead of your opponent. Similarly, you gain permanent control of a Damaged Golem if a Harvest Golem under the effects of this spell dies. This does not however apply to Blessing of Wisdom, as the caster of the spell remains the same regardless of who controls the minion. Using a Recombobulator lets you keep the transformed minion.