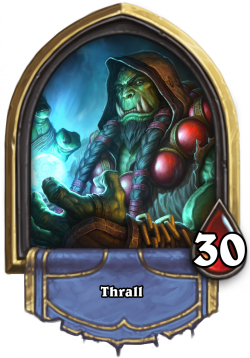 The Shaman class is represented by Thrall. As masters of the elements, they can call upon nature to strike their foes with lightning, fire, water and earth. Shamans can overload themselves to unleash huge combinations of spells and minions in a single turn, but must spend a turn to recover afterwards.

Shamans are a very board control orientated class with a lot of cheap removal. They have a unique game mechanic called Overload, allowing you to play a card at a discount while paying the remainder the turn after. As a result, mana management and planning are crucial. They are also the only class that can bestow Windfury using Windfury or Windspeaker onto a minion allowing it to have incredible burst damage. Shamans have a wide array of spells that compliment both burst (Lava Burst, Rockbiter Weapon) and control play styles (Hex, Earth Shock).

Shaman's Hero Power, Totemic Call, summons a random totem out of four possible choices: Stoneclaw Totem, Wrath of Air Totem, Searing Totem and Healing Totem. While each totem has their strengths, due to the random nature of the ability Shamans have to rely on a bit of good luck to get the right totem for the situation.

Shaman are spiritual visionaries of tribes and clans. These gifted warriors can see into the world of spirits and communicate with creatures invisible to the eyes of normal beings. They are beset by visions of the future and use their sight to guide their people through troubled times. Although shaman may seem wise and serene at first, they are formidable foes; when angered, their wrath is as fierce as those who have a connection to Eternals or nature. [1]