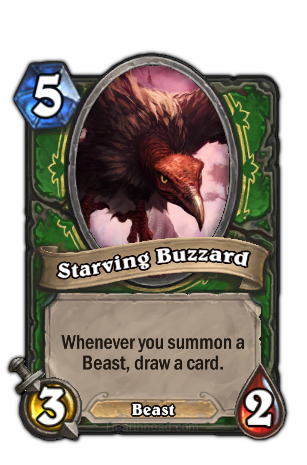 Starving Buzzard is a Hunter class Minion card. Its effect is whenever you Summon a Beast, you draw a card.

Ideally the goal in playing a Starving Buzzard is to then summon other beast minions, causing you to draw as many cards as possible for maximum efficiency. The Buzzard should be protected if possible, as it is a high priority target for your opponent, especially in the early game. A great combination to set up with Starving Buzzard is to put it out as bait when you have no creatures on the field and your opponent does. Then play a Snake Trap. If your opponent tries to attack and kill your Buzzard, the trap will activate first, allowing you to draw a total of three cards before the Buzzard actually dies.