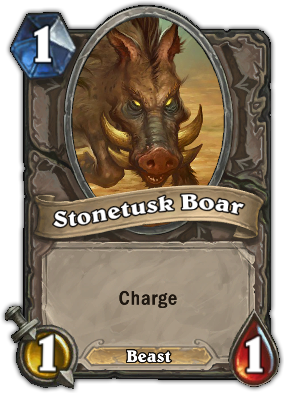 Stonetusk Boar is a Neutral class Minion card. Its effect is that it can Attack on the first turn it is played.

A standard card in aggro decks. 1/1 for 1 Mana is very ordinary, but charge is a very powerful ability that always makes a card considerably better. Firstly this can be a good turn 1 play in aggro decks, immediately giving you the momentum. But more importantly, when combined with other boosting minions such as Raid Leader or Dire Wolf Alpha, and specifically in Beast decks with Timber Wolf, this card can go up to 3 or 4 attack, which is great for 1 mana and with charge to boot this card becomes very good value for mana. However this card has the obvious drawback of, while unboosted, only having 1 attack. Also only having 1 health leaves it open to easily being killed by both the Mage and Druid Hero powers, making it a rather poor turn 1 play against these classes.