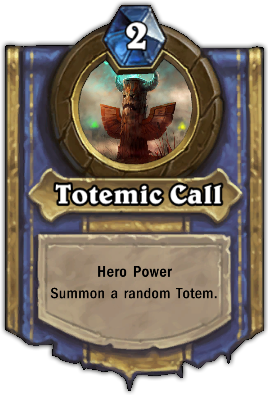 Totemic Call is a Shaman class Hero Power. Its effect is to Summon a random Totem.

There are four different totems that have a chance to be summoned by using Totemic Call. They are Stoneclaw Totem, Wrath of Air Totem, Searing Totem, and Healing Totem. Each of these is useful in different situations, however with the fact that you cannot choose which totem is going to be summoned, it is often best to play a creature from your hand instead. If you have two mana after you have played what cards you can or want to on your turn, this ability is great for putting additional minions on the field. Even if you get a 0/2 totem that doesn't seem to do anything right away, it can still soak up some damage from your opponent, who will more than likely choose to kill the totems before dealing damage to your hero.

Sometimes if you have no obvious way of playing the cards in your hand to full effect, you can choose to summon a totem first, and then play off of which one you got. If you summoned a Searing Totem or Healing Totem, play more creatures for even more board control. If you got a Stoneclaw Totem and your opponent doesn't have too many creatures, try playing a minion that you would want protected like a Knife Juggler or a Mana Tide Totem. If the summoned totem was a Wrath of Air Totem, your Lightning Storm just got a lot stronger, and maybe you could clear the board with spells.