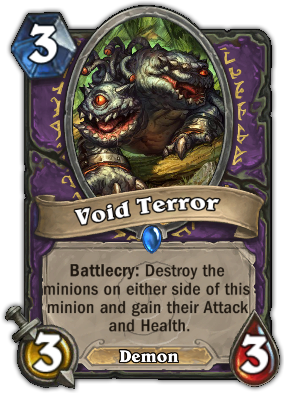 3
Effect
Battlecry: Destroy the minions on either side of this minion and gain their Attack and Health.
Card Information
Class:
Warlock
Type:
Minion
Subtype:
Demon
Rarity:
Rare
Set:
Classic
Artist:
Alex Horley Oriandelli
Description
If you put this into your deck, you WILL lose the trust of your other minions.

Void Terror is a Warlock class Minion card. Its effect upon being played to the battlefield is to destroy the minions on either side of this minions and gain their Attack and Health.

One can maximize the battlecry by consuming minions which are under temporary buffs, e.g. Dark Iron Dwarf's battlecry, or who would most certainly die on the next round, e.g. a minion under the effects of a Corruption card.

A play, combining these two ideas, is to buff an own minion with Power Overwhelming, attack/trade with it, and then consume the empowered minion using Void Terror's battlecry. The temporary +4/+4, the minions attack, and its remaining health will live on in the Void Terror, instead of being removed from the game.