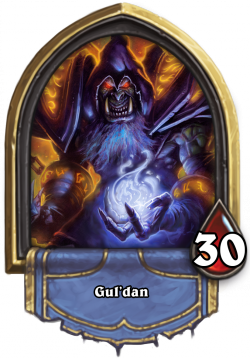 The Warlock class is represented by Gul'dan. Known as practitioners of dark arts, Warlocks call upon powerful demons and shadowy spells to aid them in exchange for their own life and more. Most of their cards in Hearthstone have a lower mana cost than their neutral counterparts, but have an additional cost like Health or discarding cards.

The most effective Warlock decks are defined by the fact that their hero power Life Tap costs health in addition to mana. This helps them play otherwise situational cards like Molten Giant in slow control oriented decks or very aggressive decks that aim to end the game before the health loss becomes a factor. The card draw effect also lets them play strong minions like Twilight Drake and Mountain Giant while removing the need to include many otherwise weak cards for drawing more such as Loot Hoarder and Acolyte of Pain. Numerous Taunt minions are often used for protecting your lowered life pool.

Warlocks are masters of the dark arts, devoted to furthering their understanding and use of shadow and fire based magics along with summoning demons from the Twisting Nether. They appeared on Azeroth during the First War when Gul'dan, the first of their kind among the invading orc clans of Draenor, led the Horde across the dimensional gulf through the Dark Portal while in servitude to the Burning Legion. [1]