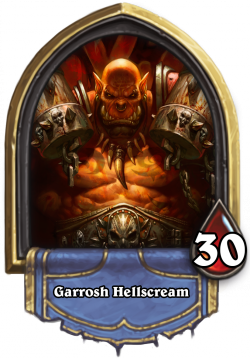 The Warrior class is represented by Garrosh Hellscream. Warriors have access to a variety of extremely powerful weapon cards, which synergize well with their hero power, Armor Up!. For minions, Warriors have access to plenty of Charge and high damage, low health attackers. They also have a variety of flexible spells that can either kill enemy minions or damage their own to buff attack.

Warriors have access to a lot of Health gain in the form of Armor through Armor Up!, Armorsmith and Shield Block, combined with a multitude of removal such as Execute, Shield Slam and Gorehowl. This makes them able to easily stall the game until late turns to run some of the slowest decks in Hearthstone. Going over the 30 Health cap with Armor makes the class heavily favoured against most aggressive decks and decks built around reliably dealing 30 damage such as Miracle Rogue and Freezemage.

Warriors can also effectively play on the other end of the scale by going on the aggressive using a combination of charge minions (like Kor'kron Elite and Wolfrider) and powerful weapons like Arcanite Reaper.

As long as war is waged on Azeroth, there will be men and women who fight those wars. Warriors are no mere sword-swingers; they are skilled combatants, combining strength of arm, knowledge of weaponry, and practiced maneuvers to slice or bludgeon their foes into little red bits. Warriors are the most versatile of the combat classes, and they supplement their fighting prowess with the ability to rally their allies and spur them to victory. They charge into the heart of the battle and survive the most grievous of wounds. Warriors are common in dwarf, Forsaken, human, and orc societies, but many other species also fill their ranks with warriors. Masters of swords, spears, and weapons of all kinds, warriors share a common way of life on Azeroth. Using their abilities to deal pain and cause bloodshed, warriors are deadly adversaries and welcome friends in violent times (which seem to be all the time in recent decades). Anyone willing to take up arms to defend their people can be classed as a warrior. A knight is the warrior elite among humans. [1]