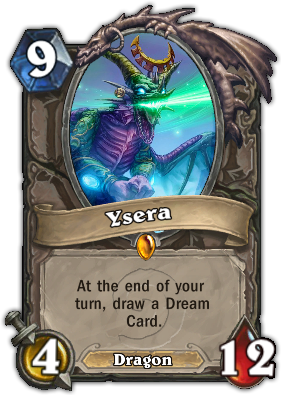 12
Effect
At the end of your turn, draw a Dream Card.
Card Information
Class:
Neutral
Type:
Minion
Subtype:
Dragon
Rarity:
Legendary
Set:
Classic
Artist:
Gabor Szikszai
Description
Ysera rules the Emerald Dream. Which is some kind of green-mirror-version of the real world, or something?

Ysera is a Legendary Neutral Dragon Minion with an end-of-turn effect.

At the end of every turn after Ysera has been put on the board and until it dies, you will draw one of the listed cards. These cards are referred to as Dream Cards and are unique to Ysera.

Ysera is often used as a slow and methodical finisher to be used in very slow control decks. At end end of every turn, you will draw a Dream Card; each of them is immensely powerful for the cost. Be warned though that Ysera is not a card you can play when you're losing and will die very soon. That is, you must have a tempo advantage when you play Ysera. Unlike some level eight+ mana legendaries, Ysera offers no benefit until your next turn. Some of Ysera's dream cards, such as Emerald Drake and Laughing Sister also don't provide any benefit until two turns after you've played Ysera. At a nine mana cost, playing Ysera essentially forfeits your turn.

Ysera boasts four attack, which is a blessing in disguise as she cannot be removed via either Shadow Word: Pain, Shadow Word: Death, nor Big Game Hunter. At 12 HP, she is also resistant to direct damage spells such as Fireball and Starfire. The most effective ways to kill Ysera come from instant removal. Classes that lack effective instant removal such as Druid and Paladin will especially have trouble getting rid of her. In summary, she is best used in extremely slow control decks against slightly faster control decks, especially against Druid and Paladin.

Eonar the titan blessed Alexstrasza's younger sister, the lithe green dragon Ysera, with a portion of nature's influence. Ysera fell into an eternal trance, bound to the waking Dream of Creation. Known as the Dreamer, she would watch over the growing wilds of the world from her verdant realm, the Emerald Dream.

Ysera was one of the Dragon Aspects that gave some of her power to the Demon Soul, not knowing Neltharion would betray the Aspects.

After the War of the Ancients, Alexstrasza planted a magical acorn from the Mother Tree G'Hanir within the second Well of Eternity, created by Illidan. The Tree grew large till it reached the heavens and was crowned Nordrassil. Ysera enchanted the tree so that it would be bound to the Emerald Dream.

Ysera is green, and her skin glitters with countless emeralds for scales. Her physical form is ghostly, ethereal, like watching a living dream or vision. The Emerald Dream is a place where all living beings dream when sleeping. It is a place of where sentient beings have dreams of hope, and faith for a better tomorrow. From the Emerald Dream, Ysera can observe all lesser races. Her eyes are always closed, although you can see her pupils move constantly below her eyelids as if watching many dreams at once.[1]