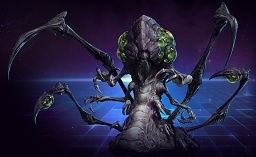 Abathur, the Evolution Master of Kerrigan's Swarm, works ceaselessly to improve the Zerg from the genetic level up. His hate for chaos and imperfection almost rivals his hatred of pronouns.