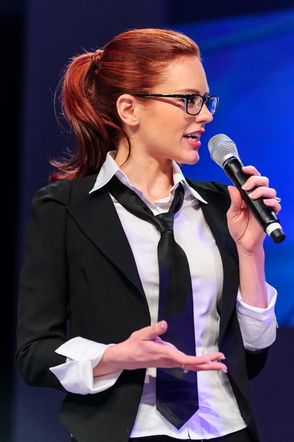 Anna Prosser Robinson is a community figure, eSports media personality, streamer, host, and caster. She is the co-host of Misscliks' Heroes show: "Eye on the Storm" with Gillyweed, and is known for previous work in StarCraft 2 as well as gaming in general.

Anna started her career in eSports working as facility operations manager in the "Evil Geniuses Lair" which housed the Evil Geniuses StarCraft 2 Squad.[1] She married Evil Geniuses StarCraft 2 captain and gaming personality Geoff iNcontroL Robinson in 2012.[2] The pair moved to San Francisco soon after to continue working with Evil Geniuses which became GoodGame Agency and was acquired by Twitch, where Anna now works full time as Programming Manager.[3] She is also a co-founder and cast member of Misscliks [4], a community devoted to "uplifting and providing support for female role models in geek and gaming culture." Anna additionally works often as a freelance host in esports, as well as at events like San Diego Comic-Con and E3. Anna began her Heroes involvement immediately upon release of closed alpha, streaming the game, co-hosting the weekly podcast Eye on the Storm, and eventually being tapped to host the first competitive Heroes of the Storm exhibition showmatch at Blizzcon in 2014.