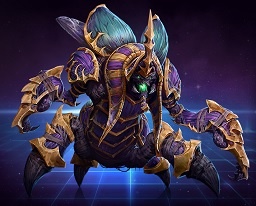 Anub'arak, the Traitor King, is a Melee Warrior class hero in Heroes of the Storm. Anub'arak was slaughtered in the War of the Spider in World of Warcraft lore, only to be raised as a member of the undead by Ner'zhul and Arthas to serve them.

Once a proud nerubian king, Anub'arak dared to stand against the Lich King's invasion, but despite his bravery, he too fell to the unrelenting Scourge. Resurrected into undeath, the Traitor King now serves as a towering, weapon of destruction.