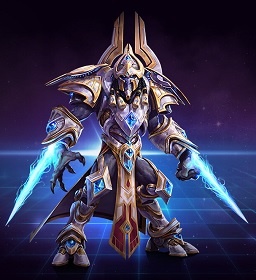 Artanis, the Hierarch of the Daelaam, is a Melee Warrior class hero from the StarCraft Universe. He is the Leader of the Daelaam, a united Protos Government formed by the Khalai (High Templar), Nerazim (Dark Templar), the Purifiers, and some Tal'darim. Not all Protoss are part of the Daelaam, as many Tal'darim refused to unite with the other Protos again. After uniting most Protoss, he wants to conquer Aiur back from the Zerg, leading to him being the main protagonist of the StarCraft II: Legacy of the Void campaign. His Heroes of the Storm appearance is based on his time before the attack.

Hierarch Artanis is an indomitable warrior who seeks to unify his beleaguered people. As a renowned and experienced Templar, Artanis combines martial prowess and tactical acumen—striking swiftly with his psi-blades, taking the brunt of enemy assaults with his shields, or calling upon his flagship, the Spear of Adun, to turn his foes into dust. He’ll let nothing stand in his way to restore the glory of the protoss.