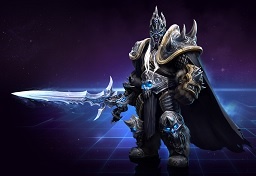 Arthas Menethil, The Lich King, is a Melee Warrior class hero in Heroes of the Storm that specializes in serving as a damage sponge in fights and in providing strong chasing potential in engagements. He was first introduced in Warcraft III: Reign of Chaos where he was a playable Paladin who eventually, while under the influence of the mighty sword Frostmourne, turned into a Death Knight. He returned as a playable character in the expansion, The Frozen Throne during which events he turned into the Lich King. Eventually, he served as a boss in the World of Warcraft expansion Wrath of the Lich King. He was one of the initial 18 heroes in the Technical Alpha phase of the game.

Once the crown prince of Lordaeron and the protégé of the legendary paladin Uther the Lightbringer, Prince Arthas fell to darkness. In a desperate bid to save his people he was corrupted by the cursed blade Frostmourne, its hatred consuming him. Now he serves the Lich King as a death knight eternally bound to his terrible destiny...and always a little cold.