From Liquipedia Heroes of the Storm Wiki
[e][h] bkid 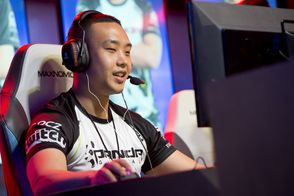 The captain of the coL.HoN squad, Bkid, had a name that was almost synonymous with dominance in the competitive HoN scene. As one of the first DotA pros to transition to Heroes of Newerth, Bkid joined up early with other strong players to form the classic team We Heart Pig. Though the team went through multiple name and line-up changes, becoming x6, Loaded, and eventually Evil Geniuses. The one thing that never changed was the top tier play you could expect from it's members, especially Bkid. Though EG was able to capture first place in the DYA Singapore LAN finals in addition to multiple Golds in online events the team was eventually dropped by their sponsor in mid 2011 and Bkid stepped back from the scene. After a short hiatus, Bkid returned in late 2011 to form Team EZ, a team of super stars that ultimately failed to capture any major victories. After the all stars had gone their own ways, Bkid was picked up by the still relatively new Trademark eSports organization in early 2012. With tdM, Bkid found both renewed success and the attention of compLexity Gaming, a premier organization looking to get back into Heroes of Newerth. Back to back first place finishes in major online tournaments followed by a 4 month streak of not dropping a series secured coL.HoN's spot as the top team in the scene. Bkid is heralded as one of the best drafters and initiators in the scene, two skills that contribute to his team's continued success. When not in game Bkid can often be found in California gyms where he keeps in top form and trains to maintain his title of Sidestep King.

Along with his teammate MoonMeander, Bkid switched to Dota 2 during the decline Heroes of Newerth's competitive scene.