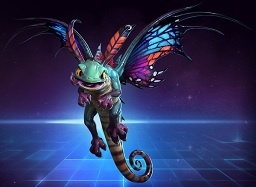 Brightwing, the Faerie Dragon, is a Ranged Support class hero.

The Faerie Dragons of Ashenvale are known for their playful demeanor, seemingly disappearing at a whim. The mischievous Brightwing is no exception, often materializing out of nowhere to save her allies or just to mock her foes.

They have long been used by the night elves in their endeavors. They have a powerful natural defense against magic and the unique ability to phase out of reality. Their defense seems to work by the dragon encasing itself within a strong energy shield that repels most magic and conventional attacks. While in this form they can siphon the unused magical energy wasted in basic spell casting, and then focus, amplify, and direct it back at the unfortunate caster in a sort of "feedback" attack. This ability is very powerful but requires a great deal of effort, and can only be used sporadically, requiring the dragon to rest between uses. For this reason, the faerie dragons often travel in packs.

After the second invasion of the Burning Legion, Malfurion Stormrage summoned them from the Emerald Dream to help purge the night elf forests of demonic magics. They were called into service briefly during the night elves' hunt for Illidan, but it appears that the vast majority of these beasts have returned to the Emerald Dream along with Malfurion. The only large population left on Azeroth is located in the untainted forests of Feralas. Many also live in Ashenvale. However, they seem to lack the powers that a normal dragon has; possibly attributed to their lack of connection with the Emerald Dream. The Grimtotem tribe of tauren has recently been endangering the group in Feralas, capturing them for experimental use.