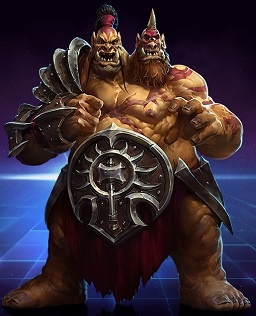 Cho’gall will be a unique addition to Heroes of the Storm who, for the first time ever, will allow two players to team up to control one Hero. Equipped with an impressive array of dark spells, and a brutish strength that can break even the most durable opponents, Cho’gall packs a whole lot more punch than the average contender brings to the Nexus. Provided that Cho and Gall manage to use their powers as one, the two-headed ogre will crush, burn, and blast apart anything that stands in their path.

Two personalities share the body of Cho’gall: Gall, cunning master of dark magics and forbidden incantations, and Cho, who’s never met a problem he couldn’t punch really, really hard. When working together, Cho’s powerful attacks and Gall’s destructive spells feed into each other to make Cho’gall’s enemies rue the day they crossed paths with this ogre. With Cho’s brawn and Gall’s dark powers, these two are ready to take the Nexus by storm… as soon as they can agree on a plan.