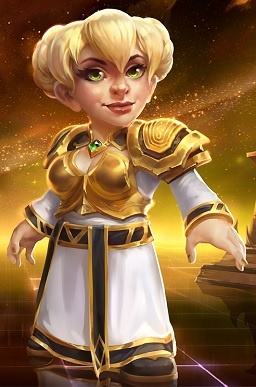 Chromie, the Keeper of Time, is a Ranged Assassin class hero in Heroes of the Storm.

At first glance, Chromie appears to be an ordinary gnome. In truth, she is Chronormu, Bronze Dragon and a master of time. Chromie uses her powers to control the flow of battle, slowing her enemies or even forcefully displacing them through time. When it comes to temporal manipulation, there’s no problem she can’t solve… with some help from her future self, of course.