From Liquipedia Heroes of the Storm Wiki
This is the stable version, checked on 23 February 2018. 1 pending change awaits review.
[e][h]Dehaka
Primal Pack Leader 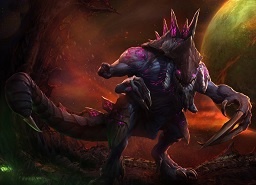 Dehaka, the Primal Pack Leader, is a Melee Warrior class hero in Heroes of the Storm.

On Zerus, the zerg pack leader Dehaka was a constantly evolving apex predator. His drive to slay the strongest prey and consume their Essence has now led him to the Nexus, where Dehaka stalks his opponents across the battlefield. Able to regenerate through massive damage and swiftly move into and out of combat, Dehaka uses the primal zerg’s mutability to deadly effect.