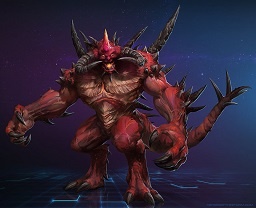 Diablo, the Lord of Terror, is a Melee Warrior class hero in Heroes of the Storm from the Diablo franchise.

Diablo is an aggressive, ability-driven hero that charges his enemies and uses fire and lightning to burn them down. He gathers the souls of fallen enemies to use for resurrection.

Known in the ancient tongue as Al'Diabolos, the Prime Evil of Terror, the demon lord Diablo seeks to claim the world of Sanctuary for the Burning Hells. As the Lord of Terror, Diablo thrives on the fear of others, only satiated by the horror of those who fall before him. His victims are innumerable, his schemes are unknowable, and his gender is...malleable.

Diablo, the Lord of Terror, is the titular character and arch-villain of the game series. He is also the youngest and most powerful of the three Prime Evils. Diablo and his elder brothers Mephisto and Baal ruled over Hell as a sovereign triumvirate until overthrown by the Lesser Evils Azmodan and Belial, who banished the Prime Evils to the mortal world of Sanctuary.

A mage order known as the Horadrim was formed to hunt down the Prime Evils and remove their corruptive influence from the world of men. Diablo was the last of the Prime Evils to be captured by the Horadrim, and his red Soulstone was buried in a series of caverns over which a monastery was built, which later became the Cathedral of Tristram.

Diablo remained imprisoned for two centuries, until his Soulstone was shattered by the Archbishop Lazarus, the corrupted advisor to King Leoric. At first attempting to take control of Leoric, only to find a portion of the king's soul denying him full control, Diablo took possession of Leoric's young son Albrecht as his mortal vessel. He was defeated by a group of mortal heroes - the warrior Prince Aidan, the rogue captain Blood Raven, and an unnamed Vizjerei sorcerer - in his lair in the depths of the labyrinth. Aidan plunged Diablo's Soulstone into his forehead in an effort to contain the Lord of Terror, but was consumed utterly by him.