From Liquipedia Heroes of the Storm Wiki
[e][h]Dragon Shire 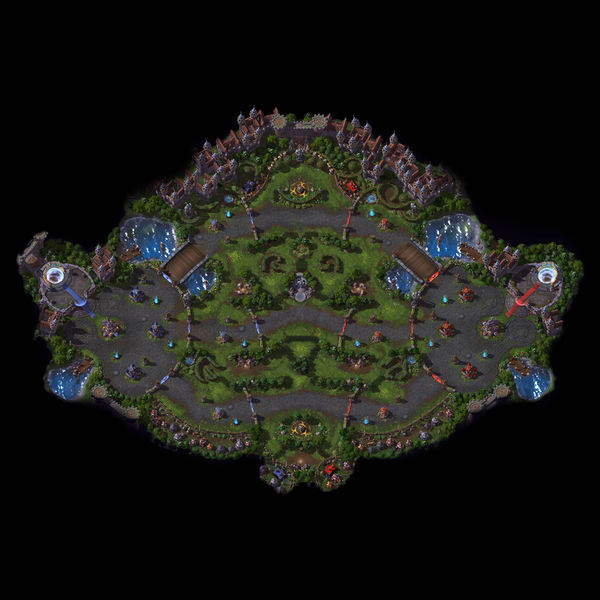 Dragon Shire is a heroes battleground revolving around the Dragon Knight. A player can control the fearsome knight if they secure both shrines and visit his statue. The dragon is quite adept at destroying buildings and a powerful adversary.

The battleground requires players to work together to secure both shrines and the statue at the same time, as well as keeping the enemy from taking advantage of this.

The main objective of Dragon Shire revolves around capturing the Dragon Statue and using it to level forts.

Located in the middle of the map, this statue does nothing until the shrines become active and are held by a team, at that time any player from that team may capture them, assuming the form of the Dragon Knight. This is a channeled ability, that can be interrupted.

Located at the top and bottom of the map, they are quite similar to watchtowers in how they are captured, by standing in a circle around them, that can be contested by the enemy. When both are held by the same team, that team may use the dragon knight statue.

The dragon form has a lot of HP, and deals additional damage to buildings. It has four abilities

There are five mercenary camps on this map.

Mercenaries on this map are perfectly mirrored, with one bottom-middle "neutral" camp, and two camps on each team's side of the map. The topmost camps are knights, the bottom ones are ogres, and the bottom-middle camp is also knights.

File:Dragon Shire Siege Ogres.jpg
Siege Giants on the bottom of the map.

Located near both bases, as well as the bottom of the map, they will all push bottom lane when captured

Located above the ogres, knights will push in top lane when captured.