From Liquipedia Heroes of the Storm Wiki
[e][h]E.T.C.
Rock God 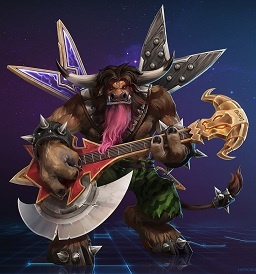 The E.T.C. is designed as a Warrior with high mobility and self-healing abilities.

The Power of the Horde incarnated by brutal rhythms and blistering guitar riffs into the most elite tauren chieftain to ever headbang across the surface of Azeroth. Don't bother putting on socks. He's just going to rock them off anyways.