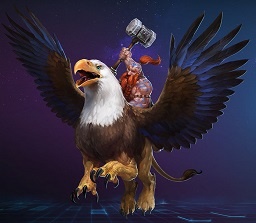 Falstad Wildhammer, the Wildhammer Thane, is a Ranged Assassin class hero in Heroes of the Storm. He first appeared in World of Warcraft as the leader of the Wildhammer dwarf clan. Riding a gryphon, he is able to strike enemies from afar and fly over any terrain. Uses abilities to avoid damage or destroy his enemies.

Falstad is the High Thane of the Wildhammer Clan and a founding member of the Council of Three Hammers that presides over Ironforge. Despite speculation, Falstad has never been dead and anyone who claims such is a liar.

Falstad Wildhammer first gained notoriety as the leader of a group of gryphon riders that patrolled Lordaeron's shores against dragons after the Second War, earning him the name Falstad Dragonreaver. Despite his skill against the giant creatures, Falstad is also one of the most respected humanoids alive in the eyes of the Red dragonflight due to his participation in the mission to rescue Alexstrasza from the Dragonmaw clan at the fortress of Grim Batol.

Following the presumed death or retirement of High Thane Maz Drachrip of the Wildhammer clan, Falstad became the new High Thane. Ruling from his seat at Aerie Peak in the Hinterlands, Falstad had officially maintained neutrality in the war between the Horde and Alliance, despite his leanings towards the latter. This allowed the Wildhammers to avoid open hostilities with the Revantusk trolls, though isolated skirmishes were not necessarily rare occurrences in the Hinterlands due to limited territory and the natural animosity between the two races. This neutrality would prove to be short lived. With the Revantusk trolls to the east and the Forsaken capital only a short distance to the northwest, as well as the growing threat of the Scourge, Falstad found himself squeezed from three sides and worked to rebuild the relationship between the Wildhammers and the Alliance.

When Magni Bronzebeard, King of Ironforge and head of the Bronzebeard clan falls prey to a curse that turns him into a crystal, a council with a representative of the three major dwarven clans is formed to succeed him, with Falstad representing the Wildhammer clan alongside Moira Thaurissan of the Dark Iron clan and Muradin Bronzebeard, King Magni's brother.