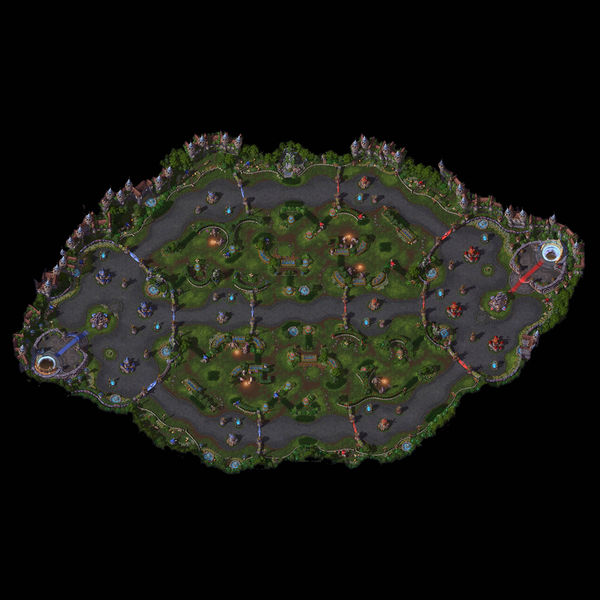 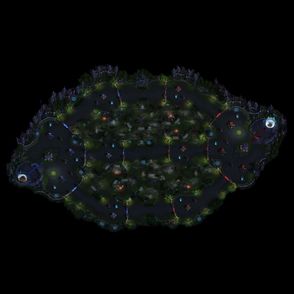 Garden of Terror is a heroes battleground revolving around the Garden Terror. Players can collect seeds by killing Shamblers and Garden Terrors at night. When a team has accumulated 100 one player may gain control over a Garden Terror and use that to attack the opponent.

This battleground has three main lanes.

The players will find themselves fighting over seeds dropped by the Night Horrors.

The main objective of the Garden of Horror revolves around collecting seeds in order to grow a Garden Terror and use it to destroy the opponents base.

This map has a day-night cycle that plays a big role in the way the map is played. The game starts with daytime and at 1 minute night gets announced and a countdown timer starts (this is 30 seconds). At night four groups of Shamblers and two Garden Terrors spawn. It becomes daytime again when all of the night terrors are killed. The next night will always spawn 3 minutes and 20 seconds after the night ended, no matter if any garden terrors are being controlled.

At night six groups of Night Horrors spawn. When attacked they drop seeds which can be collected in order to start growing your Garden Terror.

The mercenaries in this map are split evenly, with no "middle" mercenaries and are placed in opposing sides with the placement being inverted

The Kights are located bottom left and top right. They will push the bottom and top lane respectively.