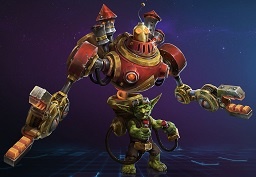 Gazlowe is great at space control. Using his Rock-It! Turret and Xplodium Charge he is able to zone enemy heroes while dealing damage with the turrets. To take full advantage of this in a team fight it does take a bit of foresight, however. He can also be used in a team to set up a great combo if Grav-O-Bomb 3000 is selected as his Heroic Ability. Another great usage of Gazlowe is soloing mercs, or the boss; he is also particularly skillful at pushing a lane solo. The trick with playing Gazlowe can be learning when it is appropriate to go after mercs, while still being able to get set up for a successful team fight. While Gazlowe can very successfully push a lane solo and do a great amount of siege damage, it is important as a Gazlowe player to not overlook your role in a team fight, and to have the map awareness to sense when you should be leaving the lanes or mercs and heading to the team fight.

Upon first glance, few would think of the diminutive Gazlowe as a fighter, but what he lacks in height, he more than makes up for in mechanical cunning. The newest mechanical exoskeleton he's been working on for example is an especially effective war machine—when it's working.