From Liquipedia Heroes of the Storm Wiki
[e][h]Gillyweed 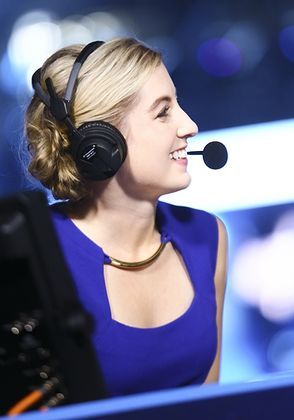 Jaycie "Gillyweed" Gluck is a Heroes of the Storm commentator, streamer, content creator and eSports community figure. She is the co-host of Misscliks' Heroes of the Storm show "Eye on the Storm" with Anna Prosser Robinson and is known for previous work in StarCraft 2.

Jaycie fell in love with competitive gaming after attending the Lone Star Clash StarCraft II tournament. After a year of eagerly watching competitive SC2, she left her job as a web content writer to pursue her dream of working in eSports. She began by making audio build order guides in collaboration with IMBAbuilds. She also created the show "StarCraft CraftStars"[1] to highlight fan artists in the StarCraft community. Jaycie began her Heroes involvement upon release of closed alpha by streaming the game and starting Eye on the Storm with her co-host, Anna. She began her casting career in 2015 with the Heroes Hype Amateur Series, and has also joined TGN Squadron as a content creator and show host. Since then, she has commentated several Heroes events, including the 2015 Heroes of the Storm World Championship at BlizzCon.

Other Community Work and Appearances[edit]