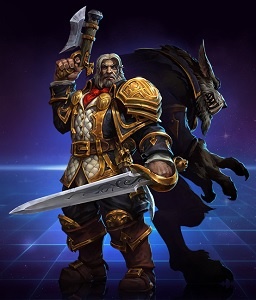 Greymane, the Lord of the Worgen, is a Ranged Assassin class hero in Heroes of the Storm.

Greymane's ability to quickly shapeshift between human and Worgen forms makes him a versatile and formidable threat in any combat situation. Whether firing from behind the lines of battle, dousing enemies in explosive Gilnean Cocktails, or pouncing fang-first into battle, the Lord of the Worgen will do what is necessary to protect all he holds dear. Those who threaten Greymane or his people would do well to fear the shadows, for they will undoubtedly meet their end at the vicious claws within.

Like most Gilneans, Genn Greymane is afflicted by the lycanthropic Worgen curse. Though he feels at fault for his people’s ill fate, he has embraced his inner beast without giving in to its feral nature. On the field of battle, Greymane relies on the marksman’s cunning to set up his targets and the beast’s savagery to pounce with deadly speed and accuracy. Now he leads his pack as both their alpha and their king.