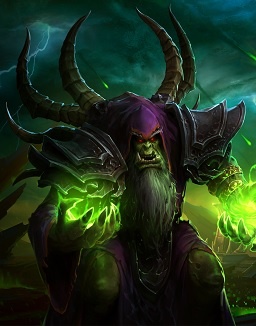 Gul'dan, the Darkness Incarnate, is a Ranged Assassin class hero in Heroes of the Storm.

Abandoning the ways of shamanism, Gul'dan entered a pact with the demon lord Kil'jaeden and betrayed his people in exchange for limitless power. But it came at a great cost: Gul'dan must sacrifice part of his own life force to fuel his destructive fel magics. With the orcish Horde under his master's thrall, both Draenor and Azeroth nearly fell into his grasp. Now, Gul'dan is set to spread his corruption across the Nexus!