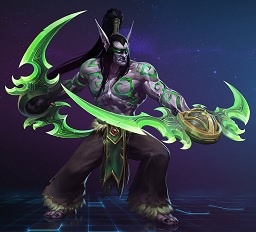 Illidan Stormrage, The Betrayer, is a Melee Assassin class hero in Heroes of the Storm. After being imprisoned for millennia, he has been freed by his brother Malfurion Stormrage during the events of Warcraft III. Eventually he corrupted and turned into a half-demon, a presence he keeps for Heroes of the Storm.

Illidan is a hyper carry.

Illidan's ability to jump around the battlefield make him a very mobile assassin. He is a master at chasing people having 2 basic abilities that pursue people and his ultimate giving him even more mobility to reposition, engage or escape with it. His Q can be used to flip over someone and bodyblock them from getting away. His W boosts his auto attack damage and can also put you ahead of the enemy.

Illidan has a very low health pool. However his E gives him the ability to dodge auto attacks and he can get a talent that also gives him a shield. Combining these attributes with Illidan's natural sustain coming from his trait that gives him 20% lifesteal. So he can survive in a fight by constantly auto attacking. Also Illidan's Metamorphosis Ultimate gives him temporary health based on how many enemy heroes he hits as well as 20% attack speed steroid. For this reason Illidan can be difficult to kill. A common strategy is to pair him with two healers. So the enemy can not burst him and he can DPS with out fear of getting popped.

Illidan Stormrage, the original Demon Hunter, betrayed his people by creating a new Well of Eternity after the demonic invasion of Azeroth. After 10,000 years of imprisonment he was freed by Tyrande Whisperwind against his own brother Malfurion Stormrage's wishes. Now, Illidan lords over the realm of Outland, slaughtering unsuitably prepared heroes who venture into his domain.