From Liquipedia Heroes of the Storm Wiki
[e][h]Infernal Shrines 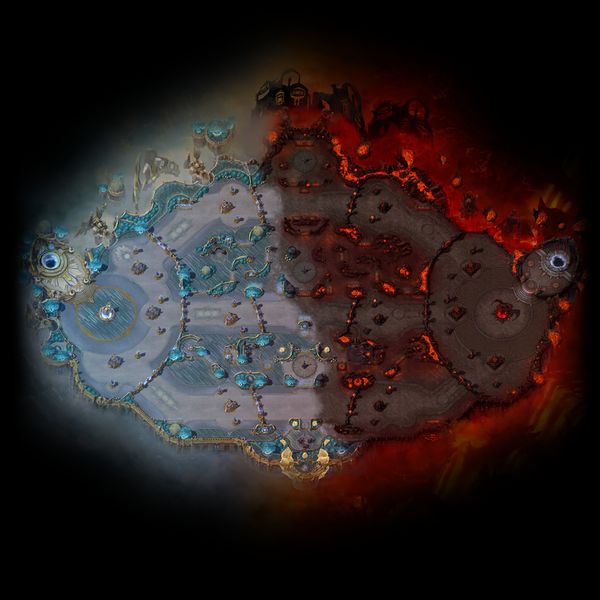 The Eternal Conflict between the High Heavens and the Burning Hells still rages within the nexus. Now the hosts of the angels and demons have turned their attention to a new source of power: The Infernal Shrines. These mystical monuments are located within a three lane battleground. Periodically, one of the map's three shrines will become empowered, drawing each team to claim its might before the other can. These shrines are winner -takes-all. Upon activation, waves of skeletons will be summoned, and the first team to kill thirty of these creatures will unleash a powerful monster called a punisher. This ally will not only help you attack your enemy's structures, but also the enemy team itself. The punisher is relentless. It will leap over obstacles, including gates, to unleash a torrent of attacks directly onto a hero. Each summoned punisher also emerges with one of three random attributes: Mortar, which fires volleys of powerful ranged attacks in all directions. Frozen, which summons exploding traps of ice which can lock enemies in place for several seconds. Arcane which unleashes searing rotating beams of magical destruction.

When pushing with a punisher, your team will have to decide how far to follow when it attacks enemy heroes. Tenacious pursuit may finish off weakened enemies, but it may also overextend your team in hostile territory. When facing a punisher, try drawing it away from the protection of its team and burning it down as fast as possible. The monster has a limited range of engagement; offering up a durable hero as bait may leave it exposed to quick, lethal damage.

Keep in mind the position of the five mercenary camps. Two are near the middle, but three are close to the lower shrine. If one team dominates this area, they may clear multiple camps. When this happens alongside a punisher, a sinngle push can become truly terrifying. In this battleground, teams must boldly seize opportunities—will you claim the might of the Infernal Shrines, or will you fall before the punisher?[1]