From Liquipedia Heroes of the Storm Wiki
[e][h]Jaina
Archmage 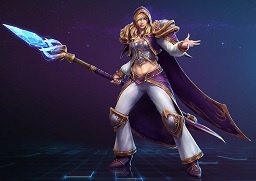 Jaina Proudmoore, the Archmage, is a Ranged Assassin class hero in Heroes of the Storm.

Jaina Proudmoore is a master spellcaster, trained by the legendary Archmage Antonidas himself. Brilliant, courageous, and wise, it was Jaina who led the survivors of the Scourge of Lordaeron to safety. But don't mistake her graciousness for weakness, or she will gladly demonstrate to you the folly of picking a fight with a sorceress.