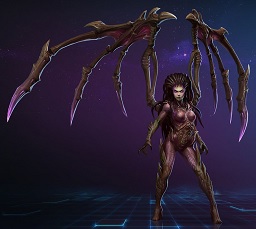 Sarah Louise Kerrigan, the Queen of Blades, is a Melee Assassin class hero in Heroes of the Storm. Kerrigan used to be a Terran ghost before being left to die and recaptured by the Overmind who infested her and turned her into a Zerg during the events of the original StarCraft. She served as main protagonist in Brood War and Heart of the Swarm. Her Heroes of the Storm appearance is based on her as a Zerg.

Once a Terran ghost with unprecedented psionic abilities, Sarah Kerrigan was betrayed by her allies and transformed by the ravenous zerg into the indomitable Queen of Blades. Now freed of The Dark God Amon's corruption, Kerrigan faces a threat that could destroy the galaxy itself.

Sarah Kerrigan hails from the depths of the StarCraft universe, and in Heroes of the Storm, Kerrigan takes on the role of an Assassin who is a heavy-hitting, combo-based Hero who specializes in initiating fights and forcing her will onto her opponents. The cunning Queen of Blades is definitely a strong ally that you’ll want by your side as you seek to control the Nexus!