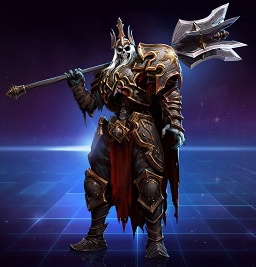 Leoric, The Skeleton King, is a Melee Warrior class hero from the Diablo universe.

The rule of king Leoric is remembered as a time of great tragedy, fear, and madness. In life, he was a tyrannical ruler, driven mad by the Lord of Terror; in death, Leoric rose again as the dreaded Skeleton King. Swinging his giant mace, Leoric laughs in the face of death. When struck down, his ghostly form drains the essence of the living, replenishing Leoric until he rises to terrorize the field of battle once again.