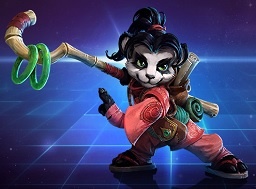 Li Li Stormstout, the World Wanderer, is a Ranged Support class hero in Heroes of the Storm.

Born upon Shen-zin Su the Wandering Isle, Li Li Stormstout led a somewhat uneventful life until she began reading the journals of her uncle Chen. Soon, nothing would sate her desire for adventure, exploration, and pestering adventurers in the Valley of the Four Winds.