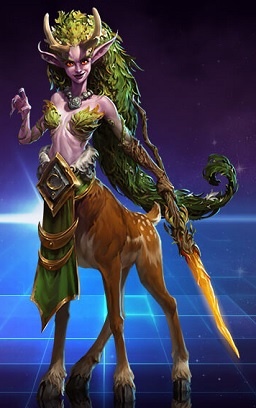 Lunara, the First Daughter of Cenarius, is a Ranged Assassin class hero who effortlessly bounds in and out of the fray, doling out the fury of the wilds without prejudice. Those who snap even one twig underfoot will quickly be met by a volley of twisted spears and afflicted by deadly, debilitating toxins that will make them easy prey. Once crippled by her poisons, enemies will be left with nothing from their encounter with Lunara, but a flash of hooves, the flicker of leaves, and the haunting memory of her distant laughter.

The dryads watch over the shadowed forests of Kalimdor. Fleet-footed, clever, and playful, they protect their home with tender loving care. But where her sisters are the delicate flowers of the deep forest, the dryad Lunara, first daughter of the demigod Cenarius, is the thorn that guards them. Lunara nimbly strikes from afar, withering her enemies with toxins, then bounds away before anyone can lay a hand on her. Take care if you face her in the Nexus, or Lunara will make an endangered species out of you!