From Liquipedia Heroes of the Storm Wiki
[e][h]Malfurion
Archdruid 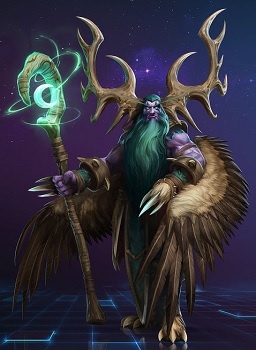 Malfurion Stormrage, the Archdruid, is a Ranged Support class hero in Heroes of the Storm. As a night elf Druid he is one of the protagonists of Warcraft III: Reign of Chaos. He is the brother of Illidan Stormrage.

Malfurion Stormrage is the greatest druid on Azeroth and the chosen student of his Shan'do, the demigod Cenarius. Communing with nature through the Emerald Dream, Malfurion protects the wilds from both demonic influences and the savage Horde. His only weakness? A penchant for taking long, long, 1,000-years-long naps.