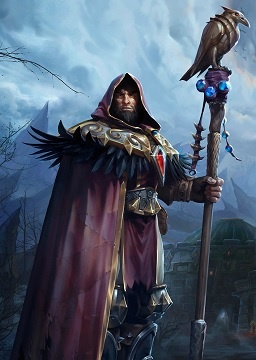 Medivh, The Last Guardian, is a Ranged Specialist class hero in Heroes of the Storm.

Under the influence of the demon lord Sargeras, Medivh opened the Dark Portal and unleashed the orcish Horde upon Azeroth. To atone for this sin, he rallied a new generation of heroes to stand against the Burning Legion during the Third War. In the Nexus, Medivh continues to lead his allies to greatness. He observes the battle from up high in Raven Form, then swoops down and uses shields and portals to turn the tide of battle. Now, he takes his place amongst the legends.