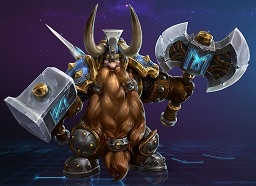 Muradin Bronzebeard, the Mountain King, is a Melee Warrior class hero in Heroes of the Storm.

Once a mentor to Prince Arthas, Muradin was unable to prevent him from becoming the Lich King. After recovering from a mild case of amnesia, he is now the leader of the Bronzebeard clan since the "diamond-ization" of his brother, King Magni.