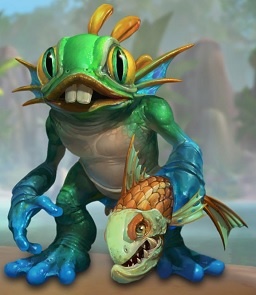 Murky, the Baby Murloc, is a Melee Specialist hero apart of the Warcraft universe in Heroes of the Storm. He represents a popular non playable race called the murlocs. He has the lowest health in the game yet he is meant to be played aggressively. His trait Spawn Egg plants an egg that he will re-spawn from upon death after 5 seconds. If Murky and his egg are both killed, he will have a normal resurrection timer like most heroes.