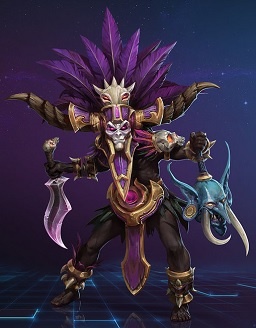 Nazeebo, the Heretic Witch Doctor, is a Ranged Specialist class hero in Heroes of the Storm. He resembles the male Witch Doctor from Diablo III (though he remained unnamed during the events of Diablo III). His abilities revolve around voodoo curses, summoning of undead creatures and poison spells.

The following ability is used by the Gargantuan.

With cabalistic incantations and vestments of feather and bone, the heretic Witch Doctor Nazeebo of the Umbaru tribe calls upon spirits from the Unformed Land to aid him in battle. Few outlanders ever encounter a Witch Doctor in the flesh, without losing their own.