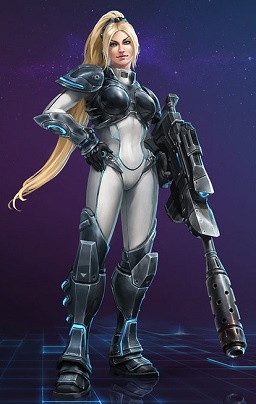 November Annabella Nova Terra, the Dominion Ghost, is a Ranged Assassin class hero in Heroes of the Storm. She was one of the 18 first heroes to be officially announced at Blizzcon 2013. She was meant to be the main character of the console game StarCraft: Ghost, but the game was put on indefinite hold. She later showed up in StarCraft II and its expansion as well as two novels and three mangas.

November Nova Terra is a ghost of the Terran Dominion and one of the most powerful psionic soldiers ever known. Nova is highly focused, determined, and extremely deadly. Even Jim Raynor wouldn't want to be caught within her crosshairs.

November Annabella Terra belonged to one of the Old Families on Tarsonis, one of the rich families with much power. Her father noticed early that she had psychic abilities and he used his power to keep her from being put into the Ghost Program, as all psychic children were supposed to. However, soon after her fifteenth birthday, her family was attacked by anti-Confederate rebels and she let out an uncontrolled psychic attack, killing everyone in a large vicinity. After that, she escaped to The Gutter, the slum of Tarsonis where she gradually became a drug addict and an unwilling subordinate to a the local drug boss Fagin. However, after a time, the Terran wrangler Kelerchian came to take Nova into the Ghost Program. Seizing the opportunity, Nova got Fagin killed and submitted to the Ghost Program willingly because she wanted the memory wipe that every ghost had to go through.[3]

Nova was one of the most powerful ghosts in existence, with a psi rating of 10 and at the Ghost Academy she was one of the best students. She was placed on Team Blue with several others, including Gabriel Tosh, whom she became romantically involved with. After some time, the Ghost students were sent to Planet Shi which was under Zerg attack and where Nova once again used her terrifying psychic attack and killed off every Zerg in a large blast radius. When she graduated from the Ghost Academy, she got the memory wipe and became Agent X41822N[4]. On a mission as a Ghost, however, Nova was exposed to Terrazine gas, which reversed the effect of the memory wipe. In the meantime, Tosh had started his own organization which aimed to to set Ghosts free by exposing them to Terrazine gas. He tried to recruit Nova, but she refused and eventually became one of the biggest threats to the organization, imprisoning several members[5].

Tosh sought the help of Raynor to break out his spectres from New Folsom Prison. Nova decided to contact Raynor to tell him that Tosh could not be trusted and Raynor had to make a choice as to whom to believe, either helping Tosh get his spectres out of prison, or helping Nova destroy the spectres' training facility.[6] Later, after Raynor had rescued Kerrigan and brought her to Valerian's research facility on Umoja, Nova led the Dominion assault on the base and captured Raynor. Raynor was later freed by Kerrigan and Nova's whereabouts were unknown.[7]

Nova was brought to the battlefield in Heroes of the Storm by The Nexus from an unknown point in time, either from the past, the present (with the end of StarCraft II: Heart of the Swarm marking the present) or possibly sometime in the future.