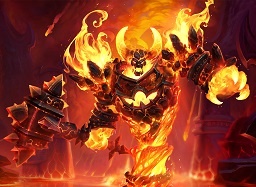 Ragnaros, The Firelord, is a Melee Assassin class hero in Heroes of the Storm.

Ragnaros, an elemental as old as the world of Azeroth, has been called to many realms… but rarely one so suited to his destructive nature as the Nexus. As he strives to reduce this new land to ash, Ragnaros hews about with the fiery hammer Sulfuras and takes command of allied and destroyed forts, scourging all who approach him with falling rocks and waves of magma. Though his power is vast, those who summon the Firelord must be prepared to watch the world burn.