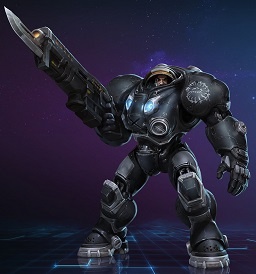 Jim Raynor (short for James Eugene Raynor), the Renegade Commander, is a Ranged Assassin class hero in Heroes of the Storm. He first appeared in StarCraft and has since been one of the series' main protagonists.

Raynor is designed as an easy to learn hero.

Ex-confederate marshal James Raynor has stood against whatever the universe can throw at him and survived with just a few scars and a penchant for Scotty Bolger's whiskey. He now stands as a bright beacon of hope in the face of a corrupt government, enigmatic protoss, and ferocious all-consuming zerg...No wonder the man drinks.