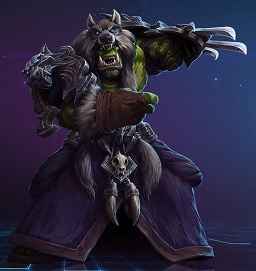 Rehgar Earthfury, the Shaman of the Earthen Ring, is a Melee Support class hero.

Rehgar Earthfury has seen his share of combat, both as a gladiator, and a master of his own team of fighters. Now, having put that life aside, he serves as a simple shaman of the Earthen Ring, earning his redemption by healing the broken lands of Azeroth.