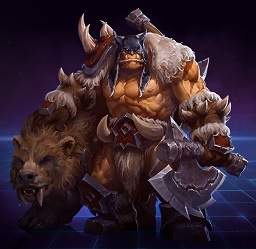 Rexxar, the Champion of the Horde, is a Ranged Warrior class hero in Heroes of the Storm.

Out in the wild, there is only the law of the jungle; survival depends on having a pack, on looking out for one another. Together with his loyal animal companions, the bear Misha and Spirit the hawk, he prowls the Nexus, always looking for the next challenge. The strength of the bear, the hawk's swiftness, and the hunter's cunning make them a formidable (and inseparable) team.