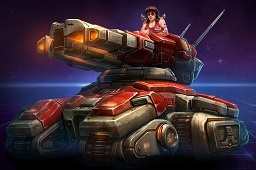 Alabama Sgt. Hammer Kowalski, the Siege Tank Operator, is a Ranged Specialist class hero in Heroes of the Storm.

Sergeant Bama the Hammer Kowalski has served some of the toughest tours around the Koprulu sector. The roar of her siege tank's shock cannon strikes fear right into the heart of the toughest of warriors... including some of her allies.