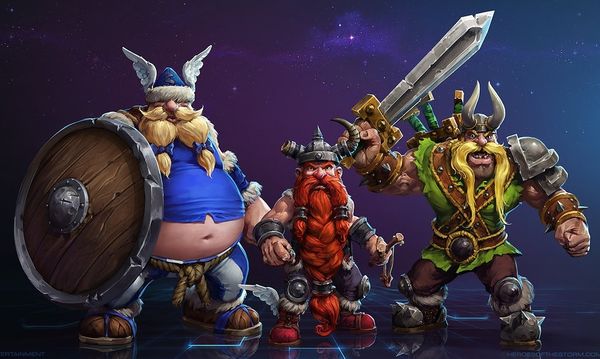 The Lost Vikings, Triple Trouble, are Specialist heroes in Heroes of the Storm. They start without any basic abilities and function differently than any other heroes. You can choose to unlock extra abilities by selecting various Talents throughout the duration of the match.

Each Viking can move, attack, and be killed separately. They will also receive individual respawn timers upon their deaths.

The following ability is only available while inside the Longboat:

The Lost Vikings is a hero designed to soak experience. While many players decide to bring the three vikings together to the same lane, others decide to exploit his experience soaking ability by splitting them bringing one to each lane. This can translate to the fact that the team is not losing experience from any lane at all, and you can therefore agree with your teammates to push a single lane very hard, forcing the enemy team a response and maybe abandon some lanes.

The Lost Vikings are to be used to make your team gain an experience advantage, and reach higher levels quickly. Don't forget to be aware of the map and your team's necessities, and be up to bring the three vikings to any objective if you consider it primordial, their teamfighting capability is very high after reaching the level 10 due to the power of their ultimate, Longboat Raid. Quitting the lane soaking prior to level 10 is normally not a very fruitful move, and once level 20 is reached, lane soaking moves to a secondary plane.

Moving the three vikings together the whole match is also to be considered if you are not confident about your micro management abilities, but have in mind that you are most likely not going to be able to squeeze all the potential that this hero has.

The Lost Vikings are back! While they briefly considered retirement after defeating the emperor Tomator, there were only so many polar bears they could wrestle before falling into a Nexus portal seemed like a solid life decision.

The Lost Vikings are an iconic triad from the early days of Blizzard’s history, and in Heroes of the Storm, they are three specialists in one, who each have their own unique strengths and abilities. This triple trouble trio is a just the rowdy bunch you’ll want by your side when you take it to your foes in the Nexus!