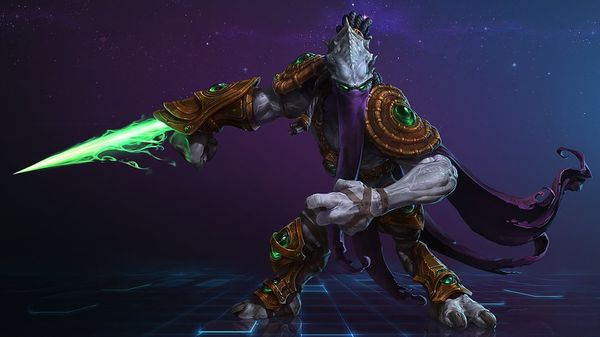 Zeratul, the Dark Prelate, is a Melee Assassin class hero in Heroes of the Storm. He is one of the main protagonists of StarCraft and appears very often in the Plot. Zeratul is a Nerazim (Dark Templer), a tribe of Protos that is based on Shakuras. His Heroes of the Storm appearance is based on his time in exile.

The enigmatic Dark Templar Zeratul serves the Xel'Naga. While he expertly wields the power of the Void, it is his wisdom that earns him the respect of the Koprulu sector's leaders - despite his penchant for dramatic entrances.

Zeratul allied with Tassadar, leader of the High Templar, to fight against the Overmind. To weaken the Overmind, Zeratul killed a cerebrate, a servant of the Overmind, using Dark Templar Energy. To do so, he needed to connect his thoughts with the thoughts of the Overmind for a short time. This led the Overmind to attack Aiur, the home Planet of all Protos. Later Zeratul was manipulated by Kerrigan, to kill Raszagal, the leader of the Nerazim. After this acts, Zeratul goes into exile, to find his peace.